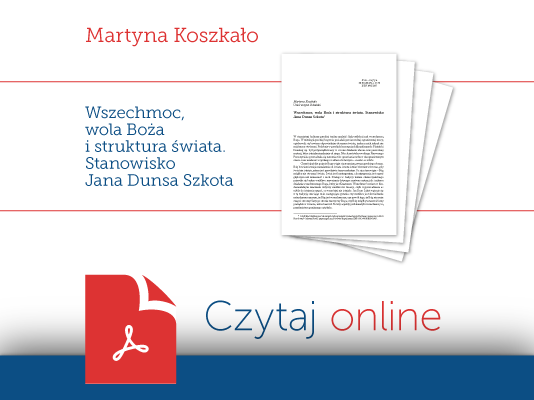 Omnipotence, the will of God and the structure of the world. John Duns Scotus’ standpoint.

This article presents John Duns Scotus’ views concerning (1) the omnipotence of God, (2) the way His will works and (3) the metaphysical structure of the world. Scotus’ opinions on this matter were shown in his following works: Quaestiones quodlibetales q. 7, Ordinatio, Liber I, dd. 42-44, Lectura, Liber I, dd. 42-44 and Reportatio I-A, dd. 42-43. The first part of the article is the reconstruction of the Scotus’ definition of the omnipotence of God. God’s omnipotence, according to Scotus, is the active power of the immediate creation of everything that is possible (the possibility of thing is based on non-contradiction). God’s omnipotence, in this understanding, is accordance with the catholic creed and cannot be proved by the human reason but may be accepted with great probability. Considerations of voluntaristic and intellectualistic aspects of God’s creative actions constitute the second part of this article. The article describes the metaphysical sources that make God unable to create impossible things (for example Chimera). Owing to His omnipotence God is able to create different possible worlds but His freedom is within the limits of His particular rationality. Duns is convinced that God is not able to create contradictory state of affairs. Being limited by the intelligible order does not exclude His freedom, on the contrary: God is free, the world is contingent and its contingency has got its justification in God’s free will.