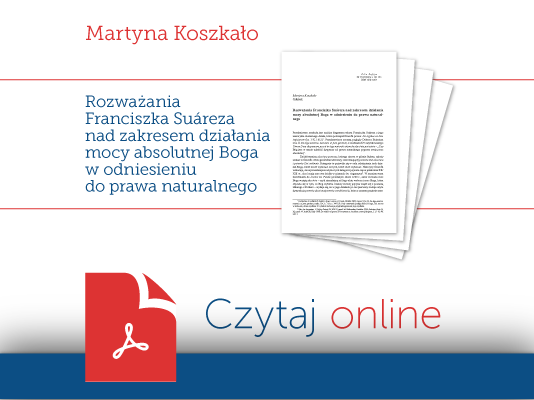 The article presents Francis Suárez’s views concerning the problem of the possibility of granting dispensation from the natural law by the absolute power of God. Suárez’s opinions on this matter were shown in his comprehensive work on the philosophy of
law: De legibus ac Deo legislatore, in Book II De lege aeterna, naturali, et jure gentium, chapter XV entitled Utrum Deus dispensare possit in lege naturali etiam de absoluta potestate. Analyzing the notion of natural law Suárez accepts the Thomistic formula, according to which, the created world is a collection of things with invariable natures. These natures require us to fulfi l certain moral obligations and to act in a proper manner. And for this reason, natural law, included in the Decalogue, is invariable and even God is not able to grant its dispensation. The commandments involve an intrinsic principle of justice and obligation and for this reason they are not liable to dispensation. God cannot act contrary to His own nature and His being just, so He would not order people to do something intrinsically unjust. Doctor Eximius justifi es moral norms expressed in the Decalogue axiologically, not in a volunaristic way, by referring to God’s will alone. Suárez criticises both strong theological voluntarism, attributed to Ockham, as well as weak theological voluntarism, attributed to John Duns Scotus.